A batch of data from different geographies is due next week as markets head towards the second half of the year.

In the US, investors await the second estimate on first-quarter gross domestic product and preliminary data on core personal consumption expenditure prices. Expectations are for a slowdown in personal consumption and weak inflation despite strong quarterly economic growth. Consumer confidence readings for May could start to show the impact on confidence of renewed trade tensions and softer data from the manufacturing sector.

On the other side of the Atlantic, markets brace themselves for a series of readings on economic sentiment in the eurozone and the UK. Data on money growth and private-sector lending, which are also out next week, are likely to continue showing signs of recovery.

In Asia, China will release the National Bureau of Statistics non-manufacturing and manufacturing purchasing managers’ index data for May. They are likely to show increased pressure after industrial production and fixed-asset investment slowed more than economists predicted last month.

Chart of the week​ 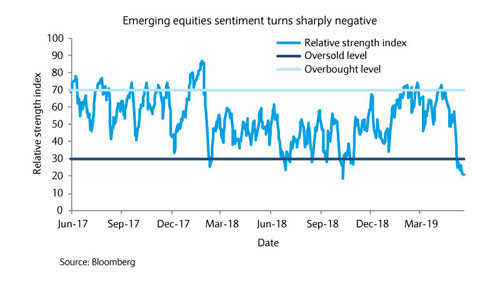 Asian stocks, as represented by the MSCI Asia Ex Japan Index, have been at the epicentre of investors’ concerns in May. Indeed, renewed trade tensions have caused Asian equities to lose more than half of their year-to-date gains in just three weeks. As a result of this significant pullback, the index now looks technically oversold, offering what could be an attractive entry point.

Although a further escalation in the US-China trade war could push Asian equities lower still, based on the current backdrop, we believe that the market may have overreacted in the short term. For instance, the relative strength index (or RSI) — which measures the magnitude of recent price changes to evaluate overbought or oversold conditions of a particular asset — has dipped below 30 for the first time this year in a sign that the recent downward move may have been too pronounced.

First, long-term fundamentals in the region remain supportive and Chinese authorities may provide further stimulus to the economy after a soft set of data in April. Second, with the market starting to question the likelihood of an economic rebound in China in the second part of the year, sentiment appears much more balanced, leaving room for positive surprises. Third, first-quarter earnings season offered reassurance that Chinese companies (around 40% of the index) will continue to grow steadily (+11% earnings growth).

In conclusion, in spite of all the geopolitical noise, we see no reason to deviate from our positive stance on emerging market equities in general and the Chinese market in particular.

French Health Minister Olivier Veran has said that the level of circulation of the virus in France is "too high" and the lifting of the curfew "is not...

Gabriel Attal, the French government spokesman, has this morning announced that the dates for the reopening of schools in France will be maintained. ...

The official death toll from Covid has exceeded 100,000 in France, with a further 300 dying in the last 24 hours according to figures released on Thur...

In changes to health measures announced by the Monaco government today, restaurants will be able to open in the evenings until 9.30pm and vaccination ...

The Mayor of Nice Christian Estrosi is meeting with the French Prime Minister Jean Castex at Matignon today, to sign a recovery agreement for ......