With Halloween approaching, hopefully markets won’t be spooked by next week’s batch of macro data (and by the ghost of a no-deal Brexit).

Needless to say, Brexit is the key event to look out for. Although it remains hard to call the final outcome, we believe that the chances of a resolution have now increased after PM Johnson obtained Parliamentary support for his Brexit bill. Meanwhile, given the protracted uncertainty, we wouldn’t be surprised to see gloomy manufacturing purchasing managers’ indexes (PMIs) out of the UK.

In the US, all eyes will be on the US Federal Reserve’s (Fed) policy meeting on 30 October, with the central bank expected to deliver a 25 basis point rate cut on the back of slowing global growth. Although the Fed is unlikely to start a full easing cycle, as trade tensions seem to be receding, much will depend on the latest domestic quarterly growth number. The advance in third-quarter (Q3) gross domestic product (GDP) is likely to edge down to 1.5% on an annualised basis from 2% in Q2, given recently deteriorating US leading indicators.

While the struggles of the corporate sector are known, we would be cautious to write off the consumer too quickly and instead wait to see next week’s employment numbers. Consensus points to a slight moderation in the unemployment rate, but this should be offset by a modest pick-up in wage growth.

In the eurozone, the quarterly GDP reporting season continues. The area is likely to avoid a recession in the three months to September, although growth should remain subdued at 0.2% quarter on quarter. With the manufacturing sector stuck in contraction territory and weaker imports suggesting softer domestic consumption, markets remain on the look-out for signs of improving macro data. Much-needed relief could come from the labour market, should September’s unemployment rate remain unchanged at 7.4%, the lowest level since 2008.

Meanwhile in China, the economy is likely to continue in “soft-landing” mode, following the weakest GDP growth rate in 26 years seen in Q3. Although premiers Trump and Xi are expected to seal their “phase 1” trade deal next month, tariffs remain in place and a definitive resolution is still far from done. So, we wouldn’t be surprised to see continued weakness in October’s manufacturing PMI, although the temporary trade truce should release some downward pressure from the manufacturing sector. 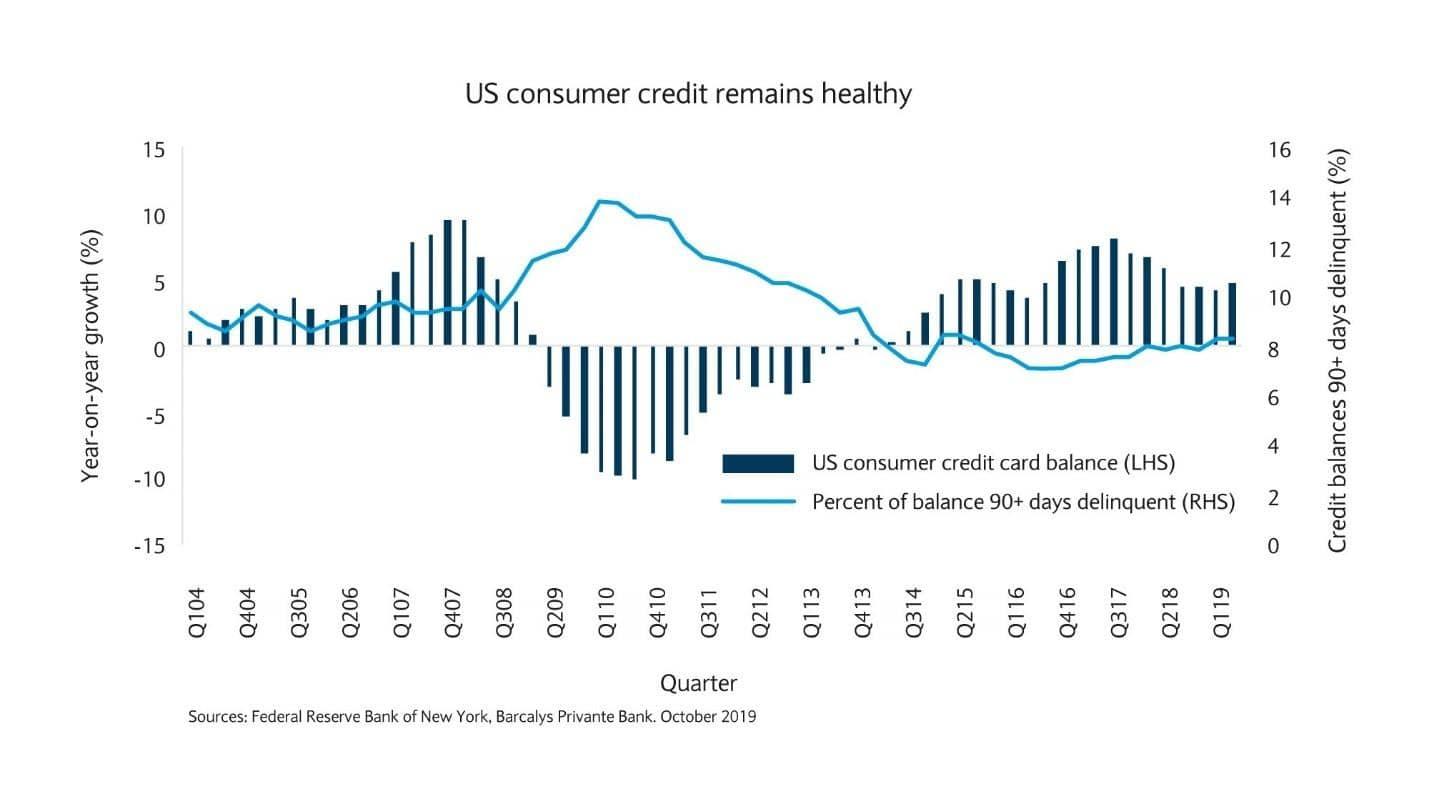 US consumers to the rescue

As manufacturing starts to contract and services faces a slowdown, the US consumer has been seen as a silver lining for the American economy. With consumption making up close to two thirds of gross domestic product, it is not surprising that investors scrutinise any data that indicates the health of US consumers.

Recent releases have been encouraging. While US headline retail sales were below expectations in September, August’s numbers were revised upwards.

More interestingly, domestic banks’ third-quarter earnings provided supportive qualitative comments. Not only have the majority of banks seen their consumer credit balances grow at a healthy mid-to-high single digit pace, but the level of delinquencies remains low and the management team’s outlooks point to continued strength.

While we doubt consumption can remain immune to a broader-based slowdown, consumers are unlikely to pare back spending until wage growth starts stalling and the jobs market cools significantly. This typically takes a few quarters to filter through and so consumption should remain supported for the time being. Furthermore, if the recent de-escalation in trade tensions helps revive economic momentum rapidly, US consumer spending may be left unscathed.

The president of the Scientific Council Jean-Francois Delfraissy has said that there will probably be 50,000 Covid-19 caes per day in France at the be...

Masks-The prefect of the Alpes Maritimes is due to decide whether to reintroduce mask wearing in outdoor spaces as the delta variant of coronavirus co...

Coronavirus restrictions- All eyes are on the prefect of the Alpes Maritimes to see whether he intends to reintroduce restrictions as cases of the del...