A fresh batch of key macro data out next week from the main developed economies look set to be mixed as markets are bouyed by fresh optimism over declining trade tensions.

The second estimate of US gross domestic product (GDP) is expected to confirm that the economy expanded by 1.9% in the three months to September. The deceleration in US growth is evident compared to 2018 levels, but data out of the country continue to be expansionary and supportive of steady GDP growth. Protectionism-driven weakness in the corporate sector is still more than offset by strong consumer spending. October’s consumption, out next week, is expected to confirm this trend and will likely be lifted by increasing optimism around a “phase one” trade deal between the US and China.

In the eurozone, inflation remains subdued after further edging down in October on the back of the region’s anemic growth profile. There are unlikely to be large upside surprises in November’s harmonised index of consumer prices flash print, which should remain well below target and warrant loose monetary policy.

However, with European Central Bank measures losing their effectiveness and the central bank running out of ammunition, fiscal spending and structural reform is now expected to play a more important role in stimulating the economy. That said, we believe that a step up in fiscal loosening would only occur in the event of deteriorating macro data.

The week ahead looks quieter in the UK, where we expect key prints from the housing market to be mildly encouraging. UK house prices growth has been modest throughout 2019, with London becoming the slowest growing region amid Brexit-led uncertainty. However, we wouldn’t be surprised to see an uptick in the November’s Nationwide house price reading. Low interest rates and heightened hopes for a Brexit resolution are likely to have delivered much needed relief to the UK housing market. 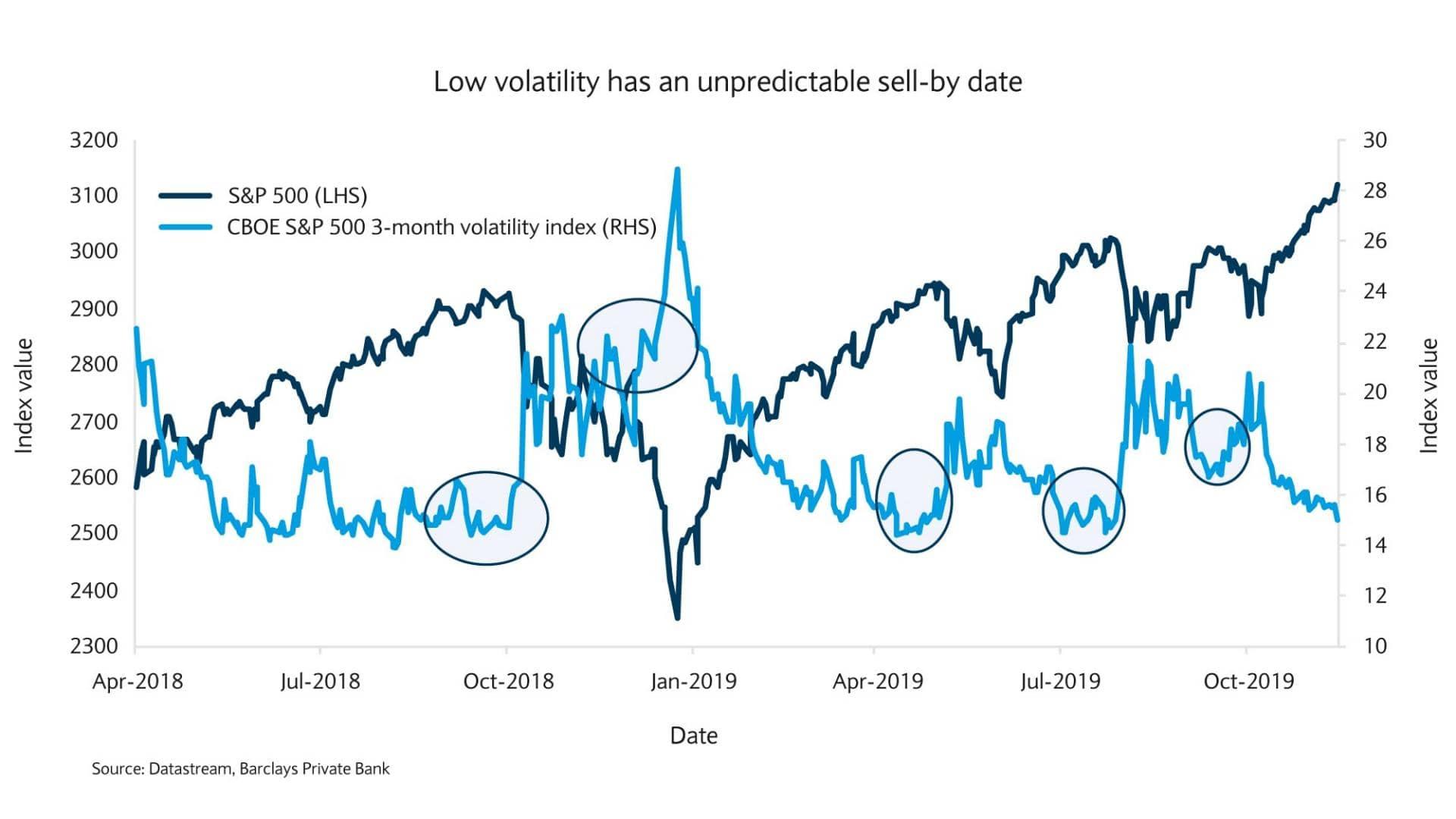 Are markets buying the rumour and selling the fact?

The S&P 500 has broken record highs once again this month. More interestingly, the recent move has occurred simultaneously with volatility falling to noticeably low levels. But is the period of market calm set to last?

Improving sentiment stems from optimism around Brexit, after the increasing likelihood that a no-deal departure will be avoided, and reports of “constructive talks” between the US and China.

However, there are some caveats worth addressing in respect of this rosy picture. Firstly, as the chart shows, volatility at such low levels may persist over the short to medium term. But at some point it is likely to increase, often triggered by something as small as a presidential tweet.

Secondly, we have seen the US and China trade negotiation movie before. A similar rally occurred the last time President Trump and his counterpart President Xi negotiated, earlier this year, only for talks to fall apart at the last minute. The result was a spike in volatility and a market sell-off resulting from escalating trade tensions.

Finally, the current trade talks are for a “phase one” agreement. As such, fundamental sticking points between the two economic superpowers are unlikely to be addressed and the prevention of further escalation, as opposed to a rolling back of existing barriers, in the dispute is likely.

Joining the herd at such a time, without a clear strategy/selection process, may not be as appealing as it appears at first glance.

A French government spokesperson has said that the 6pm curfew is "relatively effective" but "not sufficient at this stage". ...

Monaco has decided to extend all current health measures until February 19th.

The European Commission has recommended that all governments prevent “non-essential” travel to the Provence Alpes Côte d’Azur region in an attempt to ...

Several mayors in the Alpes-Maritimes have issued a joint open letter saying that they note the fall in the number of doses for vaccination centers an...

Local MP Eric Ciotti has criticised what he calls the French government’s “procrastination” in the face of Covid health crisis. While speaking to Fren...