The US Federal Reserve (Fed) meeting is easily the most important event for the market next week. While a 25 basis points cut is almost certain, it will be the tone of the ensuing press conference that matters the most. We believe that the Fed’s next move, after July’s cut, will be data dependent. For this reason, we would pay attention to the September regional Federal Reserve manufacturing activity surveys in New York and Philadelphia, both published next week.

After the recent weakness in the Institute for Supply Management data, we would look for a slight rebound in those two indices as US-China trade tensions have been easing lately.

Related to the trade tensions topic, watch out for how this impacted China’s industrial output in August. We would not be surprised to see further weakness there, but what matters most in our view is the retail sales numbers. With the Chinese economy accelerating its rebalancing from export-driven to consumer-driven, a rebound in the retail sales number from last month’s would be a welcome sign.

Finally, data on UK consumer prices is expected to be strong after last week’s numbers suggesting that wage growth reached 4% year on year. This bodes well for August’s retail sales, released next week. With inflation numbers also likely to be in line with the Bank of England’s target, the central bank is set to be on hold until Brexit’s outcome becomes clearer. 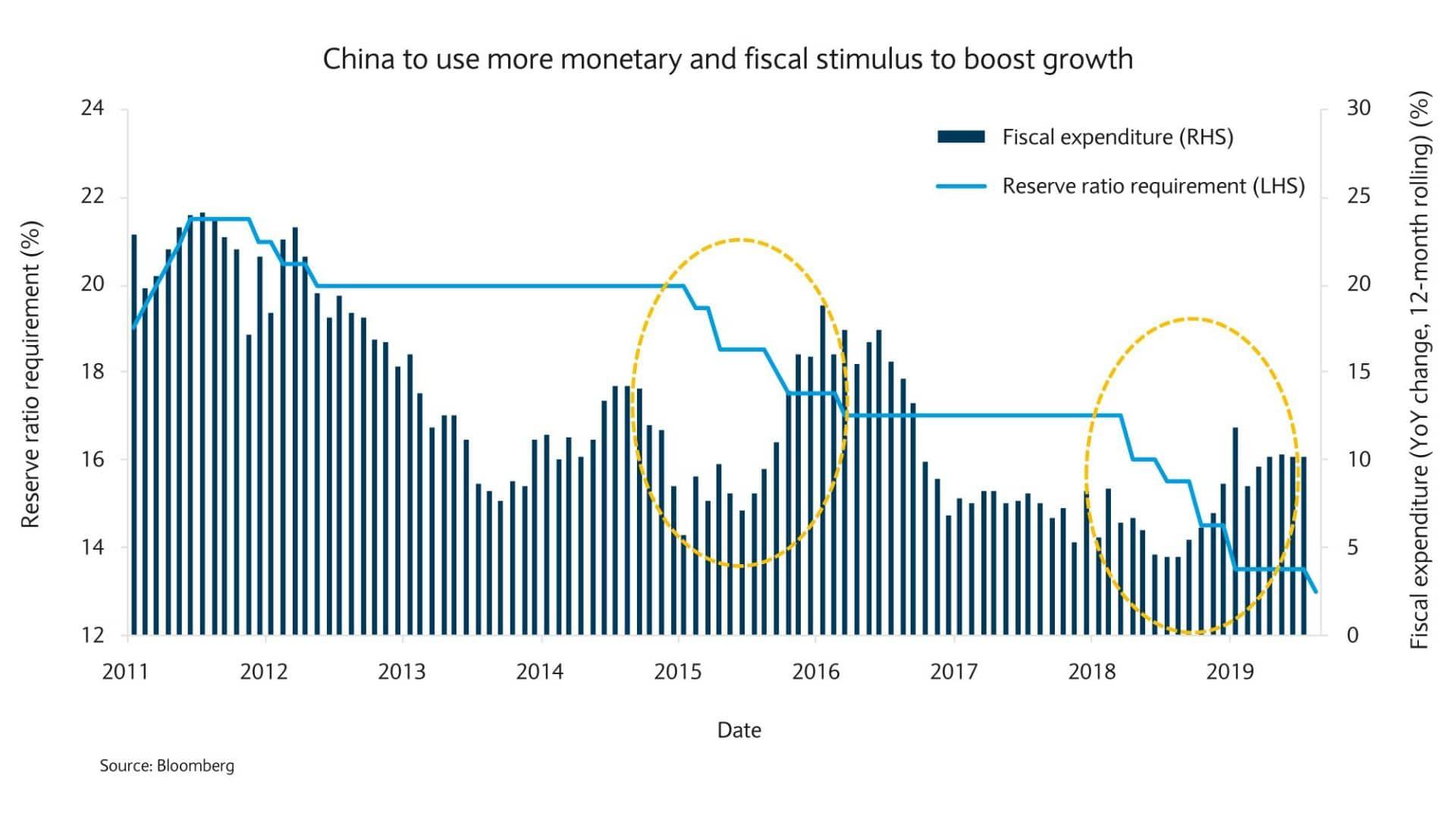 China’s central bank cut the reserve ratio requirement (RRR) by 50 basis points (bps) for all banks and 100bps for smaller banks on 6 September. The policy shift released 900 billion yuan of liquidity into the banking system. By freeing up capital and allowing banks to increase lending, Chinese authorities hope to boost economic growth at a time when trade-related uncertainties have started to take their toll.

While the relaxing of the RRR is a step in the right direction, we believe that the action is no substitute for interest rate cuts or other quantitative easing measures to promote credit creation. Indeed, although RRR cuts tend to lower the short-term funding costs, they have shown their limits in influencing long-term borrowing costs and promoting credit demand.

For this reason, we believe that additional cuts are likely in the medium-term lending facility (MLF) rates - possibly around the next US Federal Reserve rate cut, likely next week - and in the benchmark deposit rate shortly after that. But still, we believe that the Chinese authorities may be reluctant to embark in significant monetary policy easing as the domestic property market is showing signs of overheating. Instead, we think that China will focus incrementally on fiscal stimulus.

The country has already given local governments the green light to issue special bonds to support infrastructure projects and we expect more targeted measures to be announced in the coming months. While China’s growth is undoubtedly slowing, we remain convinced that the country can engineer a “soft leading” thanks to continued monetary and fiscal support. This is why we believe that Asia ex-Japan equities in general, and Chinese equities in particular, offer an attractive, long-term investment opportunity.

French Health Minister Olivier Veran has said that the government has ordered enough vaccines to protect all French people before the end of August...

French Health Minister Olivier Veran has said that if the so-called British variant of the coronavirus increases "significantly" then a new lockdown w...

A PCR Covid test will be mandatory for all European travellers arriving in France from midnight on Sunday. The measure will only be exempt for fronti...