With the fourth quarter of 2019 finally underway, markets await third-quarter (Q3) gross domestic product (GDP) readings to assess the resilience of the global economy, which significantly slowed in the second quarter.

The first major country to report GDP is China, which is expected to slow further amid ongoing trade tensions. Although China-US trade negotiations restarted at the beginning of the month, little progress has been made, with both countries entrenched in their positions.

While Chinese Q3 growth has likely been supported by a more dovish monetary policy, after the People’s Bank of China lowered banks’ reserve rate over the summer, further easing is unlikely. We believe that a boost in fiscal policy and a truce with the US, in particular, should be the most effective tools to sustain the economy.

In the US, the negatives of rising protectionism and a global slowdown have so far been contained to the manufacturing sector and mitigated by the US Federal Reserve’s more dovish stance. However, with weakness in manufacturing now spreading to services, it will take more than accommodative policies to ease investors’ concerns. Markets will welcome any signs of stabilisation in September’s industrial production and a pick-up in October’s Federal Reserve Bank of Philadelphia business index following last month’s disappointing print. That said, a sustained rebound in business activity will be contingent upon progress on the trade front.

The eurozone’s harmonised index of consumer prices and UK’s consumer prices index are both due out next week and are likely to be on the soft side in September, providing a tailwind to consumers. A combination of low inflation and steady wage growth has helped boost consumer purchasing power over the year. Household spending has effectively kept afloat European economies in 2019 in the face of Brexit woes and external demand shocks. However, while the Brexit saga unfolds, investors should keep an eye on sterling as sharp currency depreciations could lead to a significant pick-up in UK inflation. 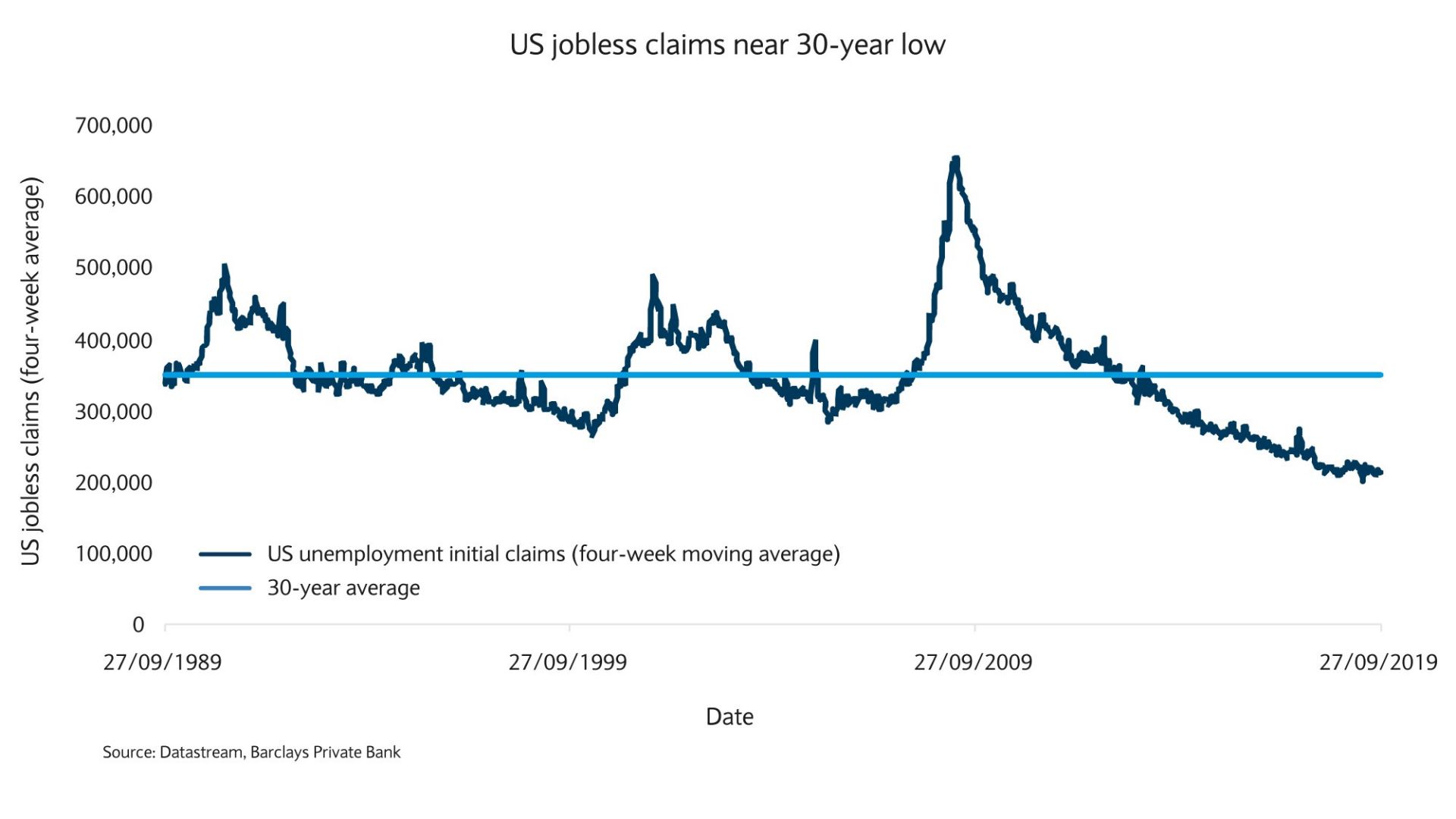 While global manufacturing is contracting and services activity has been slowing, consumers’ health has been resilient so far. Monitoring consumer spending is critical in assessing whether a recession is brewing, given that consumption is the single largest contributor to most economies’ growth.

Unfortunately, the labour market tends to be a lagging indicator and so its predictive abilities are limited. Yet, we believe it can help confirm or counter signals sent by other indicators.

In particular, the weekly jobless claims statistics are helpful in tracking tipping points in the labour market. And here, signs are rather encouraging. Indeed, the series’ four-week moving average remains well below its long-term average.

In fact, according to US Federal Reserve economist Claudia Sahm, a prolonged and significant deterioration in the labour market is needed before a recession becomes a real possibility. Indeed, according to Sahm’s work, which has predicted every recession since 1970, the three-month average unemployment rate needs to climb by 0.5 percentage points from its lowest level over a period of 12 months for gross domestic product to contract for more than two consecutive quarters.

To put this into context, the US economy has to generate around 100,000 jobs per month to keep the unemployment rate unchanged, assuming the participation rate remains stable. With the rate sitting at an historical low of 3.5%, the Sahm rule requires unemployment to jump to 4% within the next year to ring a recession alarm. This translates into an average of only 25,000 jobs created per month (compared with the 136,000 created in September).

As such, unless the US economy starts destroying jobs in the next few months, we believe that a recession looks unlikely in the next 12 months.

A businessman has appeared in court in the Var today after displaying posters depicting President Macron as Adolf Hitler...

The body of a young man has been found in Marseille. Police made the discovery this morning at 5.30am in the 13th arrondissement. ...

Several covid restrictions are set to be lifted in the Var. As of today, Friday, September 17, at midnight,...

President Macron has said that the requirement for a health pass will be lifted in certain regions "as soon as conditions allow..where the virus circu...

France’s health authorities have said that it’s safe to give both flu and covid vaccines for people aged over 65 during the same appointment....