Heat wave - As temperatures continue to climb today across France the Provence Alpes Côte d’Azur region is experiencing  high  air pollution. On Tuesday the Bouches du Rhone and the Vauclause region were placed on a pollution alert. The alert led to the left-wing politician Jean Luc Mélénechon calling for the Prefect in Marseille to ban cruise ships from docking in the port.

65 departments in France are still on an orange weather alert due to the heatwave with highs of 37 degrees in the region today reaching 38 tomorrow, 41 degrees is expected in Limoges and 40 in Clermont-Ferrand

World’s best restaurant in Menton - The restaurant the Mirazur in Menton has been crowned the world's best restaurant at an awards ceremony in Singapore. Located on the French Riviera Mirazur came top in the annual competition organised by the World's 50 Best Restaurants. Mirazur, run by an Argentine chef, was praised for a number of its dishes, including salt-crusted beetroot from its own garden with caviar cream. Spain had three restaurants in the top 10, while France, Denmark and Peru each had two entries.

Brevet - Due to the heat wave, the Brevet which was due to be taken by college students on Thursday and Friday has been postponed until Monday 1st and Tuesday 2nd July. Following the announcement from the Minister of Education Jean Michel Blanquer he added that those candidates who have family commitments with a non-refundable plane ticket or train ticket will be able to pass the exam in September. The decision to postpone the exam has been met with disbelief from many parents on social media with some calling it “the big nothing” referring to a time “when in the winter there was no heating in schools and in the summer school lasted until July 15th, in very hot conditions” one added that "today’s generation is too protected and is pathing the way for a difficult future”.

Renoir - The great grandson of French artist Pierre-Auguste Renoir has complained to the town hall of Cagnes-sur-Mer after being left out of commemorations organized in honour of the artist. 76-year-old Jaques Renoir said he “was not invited” to the opening of an exhibition in memory of the artist who died 100 years ago. The exhibition is taking place at the Domaine des Collettes, the artist’s house which has since been transformed into a museum and is on until 22nd September.

Debt - France’s public auditor has warned that the country’s debt level, which is hovering at close to 100 percent, was “worrying” and urged the government to control spending. France’s debt-to-GDP ratio is set to reach 98.9 percent this year. In a report, published on Tuesday France’s Cour des Comptes said the growing divergence between France and its neighbours on debt reduction was “worrying” and “could lead to a deterioration of the perceived quality of France’s debt among investors”.

Facebook - According to the French minister for digital affairs Facebook has said that it will hand over data from French users suspected of hate speech to French judges. The agreement, the first of its kind, between Facebook and the French government stemmed from talks that began last year between the founder of the world’s largest social network platform and French President Emmanuel Macron.

The drugmaker AbbVie has said that it will acquire Allergan Plc  for around 63 billion dollars which will give it control over the lucrative Botox market as well as buying it time to seek new growth before it loses its US patent for the highly successful arthritis treatment Humira.

AbbVie has been under pressure for some time to diversify its portfolio and its shares have dropped by more than a third since January 2018 with investors concerned about its future after the Humira patent ends.

Humira is the world’s best selling drug and brought in sales of 20 billion dollars last year.It’s now facing increasing competition from cheaper generic versions in Europe and the patent will expire in the US in 2023.

AbbVie says that it’s able to buy Allergan because of the huge amount of cash generated by Humira.It also said that a tax overhaul under the Trump administration had also helped.

The United States is hoping to re-launch trade talks with China at the G20 Summit meeting in Japan on Saturday but the Trump administration has made it clear that it will not accept any conditions around Washington’s use of tariffs in the dispute.

President Trump has threatened to impose tariffs on a further 325 billion dollars of Chinese goods if the meeting with Xi Jinping produces no progress in resolving multiple US complaints around the way Beijing does business.

A senior Trump administration official who’s spoken to Reuters on condition of anonymity said on Tuesday that Washington wants China to come back to the table with the promises that it withdrew before the talks broke down.

So far ,China has not softened its position  and said at the start of the week that both sides should make compromises in trade talks and that a deal would be beneficial for both countries.

And-The Chairman of the US Federal Reserve has hit back on demands from President Trump to make a significant half percent cut to interest rates at its next policy meeting.

Jerome Powell defended the central bank’s independence from Mr Trump and market pressure in a speech at the Council on Foreign Relations in New York on Tuesday.

He said that the Fed “is insulated from short-term political pressures” and added that the central bank was “not in the business of trying to work through short-term movements in financial conditions”.

Mr Powell did say however ,that the Fed was currently grappling with whether uncertainties around US tariffs ,Washington’s conflict with trading partners and tame inflation require a rate cut.

Italy and the Netherlands are the final two teams to make it into the quarter finals of the women’s World Cup.

Italy beat China 2-0 while a last minute penalty gave the Netherlands a 2-1 win over the 2011 champions Japan.

The first of the quarter finals is tomorrow between Norway and England in Le Havre where the heatwave conditions may not be as oppressive as in other parts of France.

On Friday the hosts France meet the defending champions the United States in what could be the match of the tournament so far.

Italy play the Netherlands in Valenciennes on Saturday with many thinking that the Dutch side are now the team to beat and on Sunday Germany play Sweden in Rennes.

The semi finals will be played next Tuesday and Wednesday  with the third placed playoff in Nice a week on Saturday and the final in Lyon a week on Sunday.

Football-Chelsea have been given permission to speak to the Derby manager Frank Lampard about replacing Maurizio Sarri at Stamford Bridge.

The move is a gamble for the London club despite Lampard being a crowd favourite and all-time record scorer.

He’s only had one season in management and although he took Derby to the playoff final ,his credentials in the top flight are not proven.

Cricket-Australia scored an emphatic 64 run victory over England in the World Cup at Lords on Tuesday which leaves the host nation’s ambitions of lifting the trophy for the first time hanging in the balance.

Australia batted first on a slow pitch and made 285-7 from their 50 overs including 100 from skipper Aaron Finch.

In reply,England lost three quick wickets at the start of their innings and they never got to grips with the Australian attack.They were bowled out for 221 in just 44.4 overs with Behrendorff taking 5-44.

The victory keeps Australia in pole position for the semi-finals with England needing to win their final two round-robin games against India and New Zealand while hoping that other results go their way.

Today-New Zealand play Pakistan at Edgebaston.Play starts at 11.30.A win for Pakistan would be the wrong result for England.

Tennis-Johanna Konta is through to the third round of the Eastbourne International Tournament as she continues her preparations for Wimbledon.

The British number one beat Maria Sakkari of Greece 6-4 7-6 and will now meet Ons Jabeur of Tunisia.

Andy Murray and his partner Marcelo Melo were beaten in the first round of the men’s doubles.

They went down 6-2 6-4 to the top seeds Robert Farah and Juan Sebastian Cabal.

AN ORANGE HEATWAVE ALERT IS IN FORCE.

Top temperatures up to 35 degrees in coastal areas and up to 38 degrees inland.

Overnight lows of 26 degrees in coastal areas and 23 degrees inland with clear skies.

Thursday and Friday.The heatwave is forecast to intensify with clear skies and highs of 35-41 degrees. 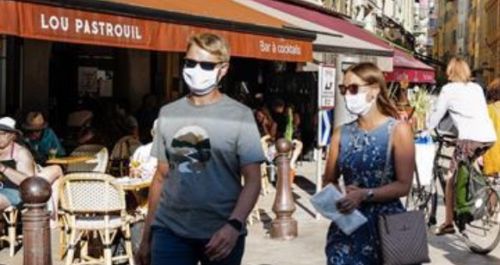