High temperatures - Temperatures in parts of the south of France reached 36 degrees on Monday afternoon but there are no signs of a prolonged heatwave for the time being.

Strong winds affecting the Var and areas west of the Cap d’Antibes saw the mercury shoot up with firefighters on high alert for the risk of forest fires.

In Signes in the Var, an area of brush went up on Monday afternoon before firefighters were able to bring the blaze under control.

Temperatures are expected to be higher in the Var this week than in the Alpes-Maritimes and winds are forecast to be brisk at times heightening the risk of forest fires.

Murder enquiry- Police in the Var have launched a murder investigation after a man was shot dead in La Valette on Monday.

Authorities say that the 24 year old man was shot in the early hours of the morning at his flat in the Coupiane area of the town.

Witnesses reported hearing shots fired at 5.20 on the avenue Pablo Picasso. Judicial police from Toulon are handling the enquiry.

Bathing death -A 90 year old woman has died while swimming off the Flots-Bleus beach in Saint Laurent du Var.

The alarm was sounded at 9am on Monday after the elderly victim was seen in difficultly some 10 meters from the shore.

A beach lifeguard and paramedics both attempted CPR but were unable to save her.

Health experts say it’s not advisable for elderly people to swim alone and wise not to go too far out to sea.

All change - As usual on the first of the month tomorrow , new prices for some items will come into force.

In Nice , street parking will be charged for again after having been free for three months since the start of the coronavirus crisis.Motorists will have to feed the meter between 9am and 8pm from Monday to Saturday with a fine of 16 euros for those who don’t comply.

Gas prices and bank charges are also changing ,mostly downwards and there are changes to partial unemployment regulations with more responsibility being put on to employers as the government starts to scale back support.

Fillon convicted - The former French presidential candidate Francois Fillon and his wife Penelope have been convicted of fraud by a court in Paris.

The court ruled that Mr Fillon had organised a fake parliamentary assistant job for his wife which saw her paid more than a million euros for work she never did.

The Fillon’s lawyers said that they would be immediately appealing the verdicts and described the conditions under which the original trial were held as “scandalous”.

Neither Mr or Mrs Fillon have been detained.

Local elections- President Macron has expressed concern over the low turnout for Sunday’s second round of the local elections.

Figures show that voter participation was only around 41 percent -down from 62 percent at the last elections in 2014.

Mr Macron acknowledged the strong performance by the Green Party and its left wi g allies and has promised an environmental response.

Europe’s papers say that the election results are a major blow for Mr Macron and his La  Republique en Marche party and proves that it’s failed to establish itself at grass roots level more than 4 years after its creation .

It was also a difficult election for the right and far right parties who saw support slipping across the board.

Nuclear power ? No thanks ! - France is shutting its oldest nuclear power plant today after four decades in operation.

The Fessenheim plant which was opened in 1977 has been slated for closure for some time and the decision comes as a victory for environmentalists.

President Macron finally ruled that the plant should close in 2018. The first reactor was shut down in February and the second will be deactivated today.

The process should be completed by 2023 and the plant on the Rhine River near the German border will be fully dismantled by 2040.

The French energy provider EDF has estimated the life of all second generation nuclear  power plants to be 40 years.

The Bank for International Settlements has warned that soaring debt levels caused by the coronavirus crisis could lead to governments putting pressure on central banks to tolerate high levels of inflation by holding down interest rates.

The BIS which is an international body representing central banks says that there is a risk of a “fundamental change “ in attitudes to inflation and a return to running economies in the way that they were operated after the Second World War.

In its annual report ,the BIS said that it was important that central banks be allowed to operate free from Political direction and that “different attitudes” to inflation could emerge if a lengthy pandemic were to “leave a much larger imprint on the economy and the political sphere”.

Financial experts in the United States are warning that many people are facing a “cash cliff” at the end of this month as their unemployment benefits drop and deferred mortgage payments become due.

Millions of Americans are thought to be in a critical financial situation with the loss of safety nets coming well before a sustained recovery kicks in.

Without new support ,welfare recipients are facing a substantial loss of income and the shortfall comes at a time when coronavirus cases are spiraling in several southern US states as well as Florida and California.

Consumer spending data suggests that lower income households have resumed spending much faster than those with higher incomes with most of the money spent on basics such as food and utilities.

When extra benefits run out ,unemployment money will return to pre-pandemic deliberately low levels which are designed to encourage recipients to look hard for work.

The major problem is that companies are not hiring especially in areas where the virus is spreading thus causing a knock-on effect for the whole economy.

And-The future of office buildings is being increasingly discussed as companies realise that they can save millions by keeping their employees working from home if feasible.

In the United States ,the 102 stories of the iconic Empire State Building in New York have been mainly empty since the start of the coronavirus pandemic while dozens of firms consider when ,if ever they’ll return.

The same situation is being weighed up by companies around the world who are seeing the advantages of their employees working from home ,meaning that overheads can be drastically cut and the need for large office space reduced.

New York City officials estimate that office property values have fallen by 10 percent since the start of the pandemic while rent collections are down and companies are seeking to renegotiate leases.

The environmental benefits are also being seen with fewer workers using cars to make work journeys.

Football-There was one game in the English Premier League last night. Crystal Palace lost 1-0 at home to Burnley.

The win boosts Burnley’s chances of making the Europa League next season while Palace look like ending the season in mid-table.

Formula 1- Mercedes will run a new black livery for the 2020 season as a signal to the team’s commitment to greater diversity and inclusion in motorsport.

Mercedes has had a silver livery since racing started in the 1930’s but the team said that the Black Lives Matter movement had “shone a searching light on how much we need new measures and actions in the fight against racism”.

World champion Lewis Hamilton described the move as an “important statement” showing that Mercedes was willing to change and improve as a business.

Cricket-Ben Stokes is set to captain England in the first Test against West Indies next week as Joe Root is likely to be missing to attend the birth of his second child.

Stokes says that if he’s handed the captaincy it “won’t change the way” that he plays the game.

He said that he hoped to set an example in style and commitment.

Golf-Postponement is seen as the most likely outcome for this year’s Ryder Cup as the sport’s bosses continue a series of complex meetings to examine the issue.

A decision had been due by the end of this month but discussions are set to continue into July with no clear signals as to whether the event at Whistling Straits ,Wisconsin will go ahead or not.

Players are said to be unwilling to play the event behind closed doors and a postponement until 2021 is seen as the most likely outcome.

Racing-Trainer Aiden O’Brien has 7 of the 17 entries for Saturday’s Epsom Derby as he seeks an 8th victory in the event.

The Oaks and the Derby are taking place behind closed doors and on the same day for the first time.

Three miles of fencing are being erected around the track and public rights of way will be suspended for the day.

Top temperatures 30 degrees on the coast and 32 degrees inland.

Overnight lows of 22 degrees on the coast and 18 degrees inland with clear skies.

Wednesday and Thursday -Partially cloudy with some thunderstorms inland tomorrow.Fine on Thursday and getting hotter with highs of 27-33 degrees. 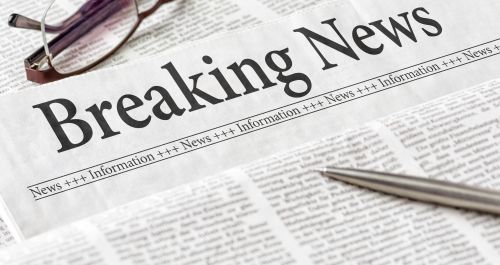 A 37-year-old man, heavily under the influence of alcohol has been hit by a vehicle on the RD562. The incident occurred shortly after 8pm on Wednesda...