Strike - Strikes against government plans to reform the pension system have still caused heavy disruption to regional and high-speed rail travel on Monday and will continue to do so today.

The current strikes have outlasted a 22-day transport workers strike of 1995, the last time a French government attempted, and eventually gave up on, reforming the pension system.

Prime Minister Edouard Philippe is expected to reopen talks with unions on the 7th January.

Meanwhile the government’s transport minister and the leader of the militant CGT have blamed each other for the travel disruptions, and French President Emmanuel Macron is expected to address the standoff in an annual New Year’s Eve speech today.

Young man dies from injuries after being hit by a car - A 21-year-old man has died from his injuries after being hit by a motorist in the early hours of Saturday morning on the promenade in Cagnes sur mer. The victim had been taken to hospital in Nice following the accident. According to the police the driver, who was under the influence of alcohol at the time, hit the young man as he was getting out of his car. The motorist was arrested on the spot and placed in police custody before appearing before the public prosecutor of Grasse on Monday.

Stolen boat - Police have opened an investigation after a boat was stolen from Port Vauban in Antibes on Christmas Eve. The association "les copains des pointus d'Antibes" has also appealed on social media for any witnesses to come forward. The 14 metre vessel was recovered by the association in 2011 and was recognized as a boat of heritage in 2013.

After studying CCTV cameras two individuals allegedly broke into the boat the “Caribé” on Wednesday 25th December and managed to leave the port in the direction of Villefranche.

Coffee capsules recalled - Certain brands of coffee capsules have been recalled after fears that pieces of plastic could leak into consumer cups. Eleven defective products were recalled on Monday from Casino, Leader Price and Franprix. If you have purchased any of the products concerned you are advised to return them to the store. 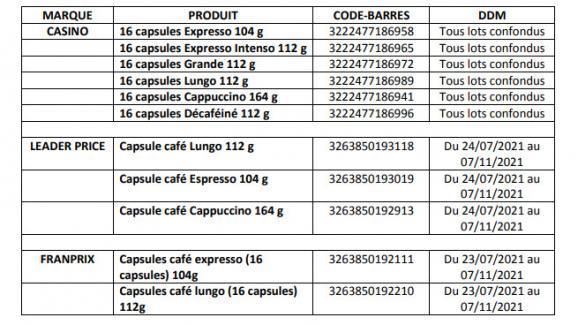 Meanwhile the company Madrange is recalling a batch of foie gras and duck mousse contaminated with listeria and sold by the supermarket Auchan. Again, details of this product can be found on rivieraradio.mc

For six years, the number of cinema goers in France has remained above the 200 million mark, despite competition from online video, YouTube and services like Netflix.

France still has the leading cinema park in Europe, with more than 2,000 cinemas, ahead of Germany and the United Kingdom.

The former Nissan boss Carlos Ghosn has fled to Lebanon after leaving Japan where he’s facing a trial over allegations of financial misconduct.

In a statement ,Mr Ghosn said that he had “not fled justice but escaped injustice and political persecution”.

It’s not yet clear how Mr Ghosn managed to leave Japan where he was first arrested in 2018.

He was on bail awaiting trial and had been forbidden to travel abroad.

The businessman holds both French and Lebanese passports and has repeatedly denied any wrongdoing.

His lawyers have accused the Japanese government of conspiring against him and have stated that the case is politically motivated.

Prosecutors in Japan allege that Mr Ghosn made a multi-million dollar payment to a Nissan distributor in Oman while Nissan has filed its own criminal complaint which accuses him of diverting money from the company for his own personal enrichment.

Ford says that reservations for its new high-end Mustang Mach-E are full with global production for the first batch of vehicles capped at 50,000 in the first 12 months.

Ford has not provided any details on how many reservations its taken for the first edition which will retail at around 60,000 dollars.

The electric Mustang crossover was unveiled last month with four other versions available as well as the first edition.

The Mach-E is being seen as a high profile test for Ford which has been dogged by profit warnings ,costly quality problems and the troubled launch of the new Explorer sport utility vehicle at the start of the year.

The Mach-E will be built in Mexico and the first of more than 12 all electric vehicles that the firm is planning to launch by 2022.

And-The White House has signalled that a trade agreement with China could come within the next week amid speculation that a delegation from Beijing will travel to Washington this weekend to sign the deal.

Speaking on Fox News ,the White House trade adviser Peter Navarro said that a deal could be signed “within the next week or so” adding that there was little more than the translation of the text to complete.

The 17 month old trade war between has been weighing on the global economy ,depressing trade volumes and leading to weaker levels of business investment.

Football-The new West Ham manager David Moyes has said that “winning is what he does” and the club had been “smart” to call him back for second term.

Moyes saved West Ham from relegation at the end of the 2018 season but was replaced by Manuel Pellegrini after the club said that they wanted to move in a “different direction”.

West Ham are currently 17th in the Premier League just one point above the relegation zone.

There’s a full programme in the English Premier League on New Years Day.

Cricket-The England opener Dom Sibley has become the 11th player in the squad to come down with flu ahead of the second Test against South Africa which starts in Cape Town on Friday.

Several players were ill during the first Test and either missed it or were forced to take time off the field.

South Africa won the match by 107 runs with the England captain Joe Root who was one of those affected saying that illness was no excuse.

Rugby Union-The Exeter and England centre Henry Slade is a doubt for the 6 Nations after fracturing his ankle.

Slade was forced off during the match against Leicester last week after aggravating the same ankle that he hurt badly four years ago.

He had a plate inserted and the new fracture is around the site of the old injury.

Overnight lows of 7 degrees on the coast and 2 degrees inland with some mist and fog forming and some  ground frost in places.

New Year’s Day and Thursday-Clear skies with highs of 14 degrees.

As France today awaits a decision from the Constitution Council, concerning the health pass, expected to be announced this afternoon. ...

Find out more about Monaco Ville Evenings taking place in the Principality.

Fully vaccinated passengers returning to England, Scotland and Northern Ireland from France will no longer need to quarantine. ...