As we enter December, markets will welcome any positive prints from the US labour market in the hope that consumers will increase spending over the festive period. October’s jobs report was stronger than anticipated with payrolls and earnings both increasing, signaling the resilience of the American economy. November’s readings are likely to surprise on the upside with non-farm payrolls expected to rise to 183,000 on the month, wage growth set to remain steady while unemployment should stabilise at 3.6% after a slight uptick in the prior month.

The outlook of the corporate sector is also improving. November’s final services and manufacturing purchasing managers’ index (PMI) is expected to improve following higher flash prints, showing that the worst may now be behind us. In particular, manufacturing is likely to have benefited from the end of the General Motors strike and easing trade tensions.

Meanwhile, business activity in China and the eurozone is more mixed, with November’s PMIs likely to confirm a divergence in manufacturing and services trends. In both regions, manufacturing rebounded in October, due to stronger domestic and foreign demand, while services activity shows signs of contagion as business confidence remains depressed. In the eurozone, in particular, PMIs continue to point to more lacklustre growth.

Finally, the UK manufacturing PMI is set to contract further next week, following the decline in the November flash readings amid concerns around Brexit uncertainty and a cooling jobs market. With a general election drawing near, this is unlikely to be reversed until more clarity emerges on the political front. 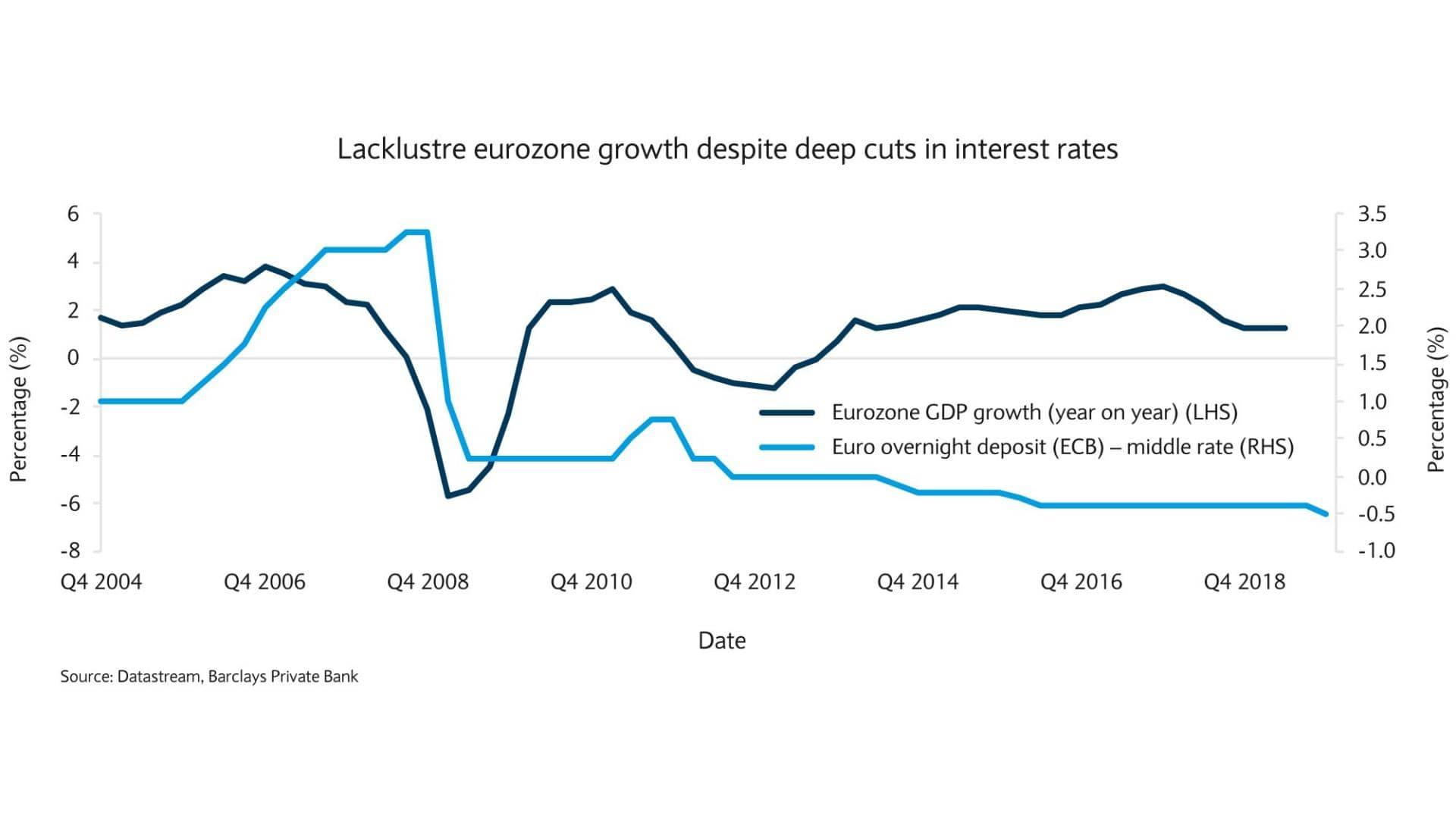 Last week, the new European Central Bank (ECB) president Christine Lagarde delivered her first policy speech. In line with her predecessor, she stressed the need for greater fiscal stimulus in the eurozone, and increased cooperation, from the bloc’s governments.

The call for a step-up in fiscal spending has been a recurring theme recently, as easing monetary policy seems to have lost its effectiveness and concerns about the ECB running out of ammunition have started to emerge.

The chart illustrates how GDP growth has remained lacklustre of late even while interest rates have been firmly negative for over a decade, and more so this year, highlighting the reduced room for manoeuvre the ECB has.

While Ms Lagarde pledged that the central bank will continue to support the economy, she added that monetary policy “cannot and should not be the only game in town”, especially as public spending remains below its pre-crisis levels. Despite resistance from some quarters (mainly from Germany), the ECB president urged that extra spending focus on initiatives that are “more digital and greener” and stressed the importance of integration to boost productivity.

We share Ms Lagarde’s view that increased fiscal stimulus is warranted to spur growth in the region. Moreover, as outlined in our Outlook 2020, we believe that spending on greener projects will be at the forefront of fiscal policy over the year ahead. For this reason, we see opportunities in industries and companies likely to benefit from environmental transition expenditure.

French teaching unions are calling for another day of industrial action this Thursday. The education ministry announced several new measures after con...

While a date is still to be confirmed for its implementation the vaccination pass will be obligatory from the age of 16 in France instead of the curr...

The French Parliament has adopted the new bill introducing the vaccination pass in France. A final vote on Sunday January 16th saw the bill voted in b...

The French High Authority of Health has approved an additional vaccine in the fight against Covid-19. The HAS today approved the use of Nuvaxovid deve...

TUV, the German certifier of defective PIP breast implants has been ordered in France to compensate 1,600 new plaintiffs of 23 nationalities, for a to...