After a particularly volatile couple of weeks for financial markets, little data is expected in the week ahead as second-quarter earnings season comes to an end.

Most macro news will come from the eurozone, with July’s harmonised index of consumer prices data likely to remain subdued after July’s core inflation came in weaker than forecast. This should keep the European Central Bank in dovish mode and we expect the central bank to provide additional monetary stimulus at its September meeting. August’s flash consumer confidence index will show how much sentiment has changed since the index improved in July, underpinned by a buoyant labour market and growth in real wages.

August’s IHS Markit flash purchasing managers’ index, for both the eurozone and the US, is likely to confirm that services activity continues to support growth while manufacturing acts as a significant drag amid mounting protectionism.

In the US, we await July’s existing and new home sales to assess the resilience of the housing sector. In light of recent rate cuts and trade tensions, the market will focus on comments made at the annual central banker bash at the Jackson Hole Annual Economic Symposium on 22 August. This is a key date to watch for hints on the outlook of the US economy and monetary policy.

In the UK, Brexit headlines keep weighing on expectations for the UK economy and we expect this to feed through to August’s CBI industrial trends survey as manufacturing activity continues to disappoint. 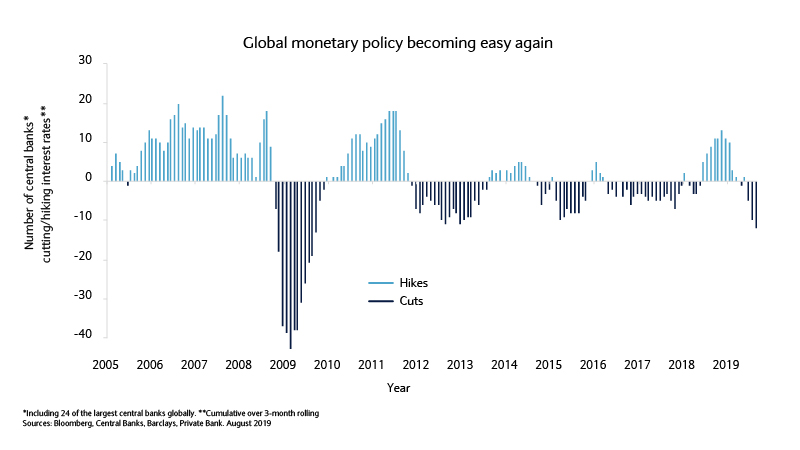 Interest rates: easy does it

The US Federal Reserve’s (Fed) first cut since the financial crisis on 31 July appears to have shifted global central bank policy with it. The “mid-cycle cut” has seen emerging markets follow suit, with Brazil, Turkey, Russia, India, and Thailand delivering larger-than-expected rate cuts since.

In developed markets, New Zealand surprisingly cut interest rates and the European Central Bank is likely to lower interest rates at its September meeting. Indeed, the Fed may cut rates in the same month. Should a no-deal Brexit occur (as seems increasingly probable), the Bank of England (BOE) could also ease monetary policy soon.

The chart looks at 24 of the largest central banks globally. Over a rolling three-month period, the number of central banks cutting rates in relation to those taking no action/hiking is noticeable.

Interestingly, the recent number of global central banks’ actions has pushed monetary policy to more accommodative levels than in the 2012-2013 period, when the euro area endured a recession, or when concerns around a possible “hard landing” in China emerged in 2016-2017.

In the current environment, yields will likely remain depressed, anchored down by easy monetary policy. As such, the search for yield” is set to continue and we believe that strategies aimed at enhancing income generation will remain attractive to investors.

Health Pass- The French Constitutional Council will announce on the 5th of August the exact details of the government’s health pass regulations follow...

In Corsica, the Prefect of the Haute-Corse department has announced that establishments open to the public such as bars and restaurants will have to c...

U-Turns- Many people say they're confused about the fresh restrictions aimed at reducing the spread of coronavirus in the Alpes Maritimes....

Aude inferno- A massive fire that’s so far destroyed more than 900 hectares of forest land in the Aude department is still not completely under contro...