Trade tensions between China and the US will likely continue to steal the headlines as we approach October, with officials from the two largest economies expected to meet at the beginning of the month.

Investors will gauge the trade impact on both the manufacturing and services components of the September IHS Markit flash purchasing managers’ index (PMI) for America. Both components are likely to stabilise after the recent softening in tone between the US and China following a series of goodwill gestures.

Despite a slowing jobs market, the consumer remains one of the bright spots of the US economy as households have partially shrug off the effect of tariffs, as suggested by August’s better-than-expected retail sales. The positive outlook should be supported by improving final readings in the University of Michigan consumer sentiment index out next week.

Eurozone business climate and economic sentiment surveys should prosper from the fresh package of stimulus measures announced by the European Central Bank in September aimed at reviving the fragile economy of the bloc. However, monetary policy is unlikely to be enough to meaningfully boost third-quarter growth. We would expect a step-up in fiscal policy before seeing a steady improvement in business activity readings. The manufacturing and services IHS Markit flash PMI for the region may be on the soft side in September.

The Brexit saga continues to unfold with the UK parliament suspended for five weeks. Prime Minister Boris Johnson continues to negotiate with EU officials, with the UK expected to reject any delay offer. With the risk of a no-deal Brexit still very much on the table, uncertainty continues to weigh on the economy and especially on the corporate sector. The subdued sentiment should feed through in the Confederation of Business Industry industrial trends survey that is out next week. 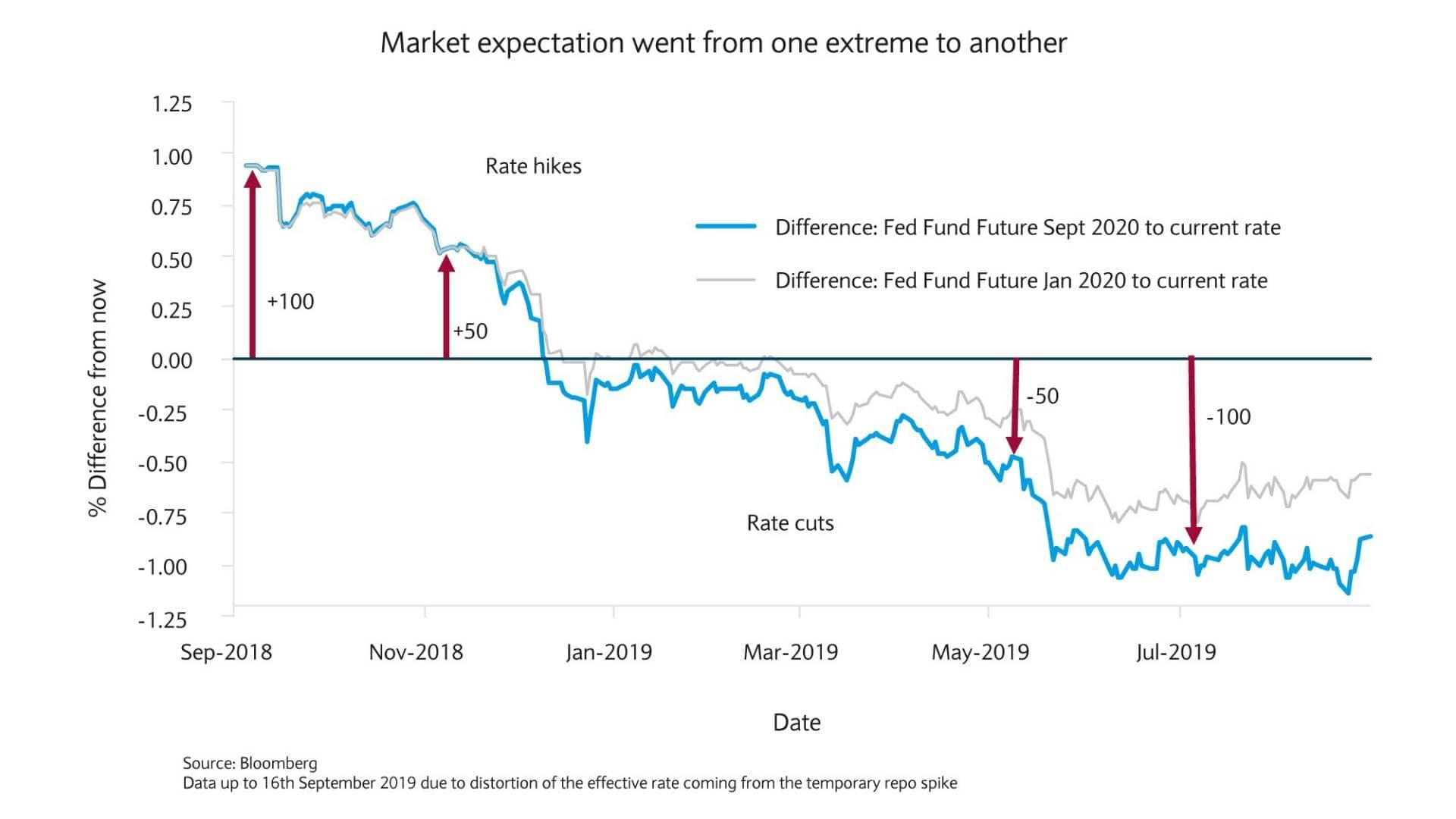 Markets were too aggressive on rate cut expectations

Anticipating rate paths is never an easy task. Market participants felt in a more comfortable position while relying on the forward guidance by the Fed during 2018. allowing for positioning for rate hikes.

Beginning of this year market participants suddenly started to question the Fed’s guidance which saw the markets positioning from one extreme, of expecting hikes, to the other, anticipating several cuts during this year. This was driven by signs of slower growth, fading fiscal stimulus, trade war escalations and subdued inflation.

Until lately, rate markets assumed the worst outcome in terms of negotiations as well as a recessionary environment. This was at odds with the economic data and the language coming from the Fed during 2019 which emphasised its data dependency when setting rates

As it stands, markets are anticipating a further 25 basis points (bps) of cuts this year and 25bps of cuts next year, on top of the 50 already delivered. This comes after the prospect of a mini trade deal in September, which led to a reduction of the cut expectation by 25 bps.

People aged 55 and over, regardless of their state of health, can be vaccinated in French pharmacies or at doctors with the AstraZeneca and Johnson & ...

The chairman of the Vaccine Strategy Council in France, Professor Alain Fischer, has said in an interview that more than 90% of adults would need to b...

From today Monday 12th April, AstraZeneca and the Johnson and Johnson vaccination against Covid will be made available to all people in France over 55...

French Health Minister Olivier Veran said this morning that 1.3 million vaccines have been delivered to pharmacists, doctors and private nurses in 2 d...