The week ahead is set to be dominated by sentiment towards the US-China trade dispute, though on the data front looks quieter than previous weeks as we enter the festive period. On Monday, China is reporting November industrial output and retail sales numbers, with consensus anticipating an increase from October’s disappointing growth. While recent Chinese output has been impeded by trade tensions, it has been mediated by slightly more accommodative monetary policy.

On the same day, both Europe and the US report December’s flash services and manufacturing purchasing manager’s index (PMI) indicator of business conditions. Despite the increasing trade tensions, December’s flash US PMI is expected to improve following higher readings in November and the end of the General Motors strike.

Activity in the UK and the eurozone is more mixed. Eurozone manufacturing rebounded in recent months, due to stronger domestic and foreign demand, while services activity showed signs of contagion as business confidence was depressed. Unlike the eurozone, the UK manufacturing and services PMI has remained lacklustre around Brexit uncertainty of late. We believe that until clarity emerges on the political front, the reading will likely continue to contract.

On Thursday, the Bank of England has its December monetary policy committee (MPC) meeting. In November, the MPC appeared to shift to a more dovish tone, with two members dissenting in favour of a rate cut as a result of the weakness from Brexit and a slowing labour market.

Finally, the final estimate of UK and US gross domestic product growth for the three months to September is expected on Friday. 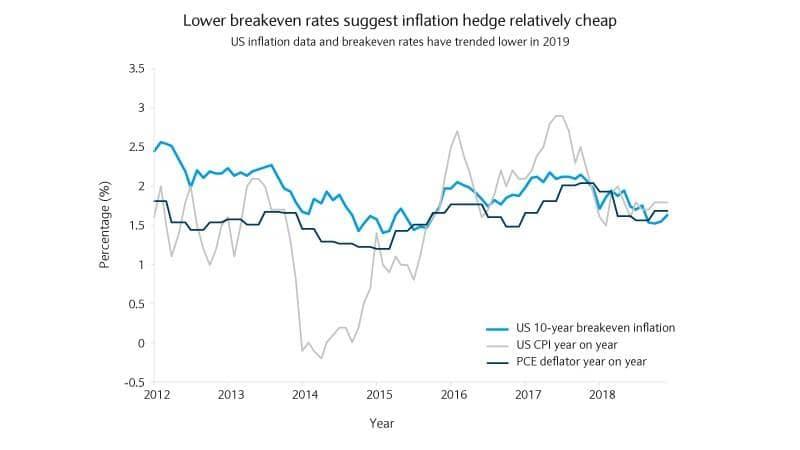 Is it time to hedge inflation risk?

One of the most influential US economic advisors and policymakers, Paul Volcker, died on 8 December at the age of 92. He was perhaps best known because of the “Volcker rule”, banning proprietary trading by large banks, implemented among banking reforms after the 2008 credit crisis.

Volcker’s defining achievement was his success in ending an extended period of high inflation as US Federal Reserve (Fed) chairman under presidents Jimmy Carter and Ronald Reagan. His aversion to inflation became evident during his college days at Princeton University when he tried to convince his mother, without success, that he should receive a bigger allowance than his sisters’ received years earlier.

The Fed again faces a tough challenge, this time trying to avert a prolonged period of low, rather than excessive, inflation. In doing so, the central bank plans to implement a new inflation framework in 2020 with the aim of letting inflation rise above the target rate temporarily. While the intention does not necessarily translate in higher inflation, it should justify some premium when forecasting US inflation.

Inflation data have lately recovered from their 2019 lows and are likely to enjoy some support due to the “base line” effect. However, the core personal consumption expenditures deflator, the Fed’s preferred inflation measure, is still below the central bank’s 2% target and is unlikely to accelerate in the medium term. This is reflected in the lower 10-year breakeven inflation rate (see chart), or the difference between nominal and inflation-adjusted bond yields, that is 1.70%.

Given the relatively low level of breakeven rates, inflation-linked bonds, which protect against an unexpected rise of inflation, seem attractive in our view.

About 150 people have been evacuated in the Morbihan department in Brittany because of a forest fire. The prefect said this afternoon that 250 to 260 ...

Germany, Greece, Poland, Romania, Austria and Italy have all provided support to France in the fight against multiple forest fires which have recently...

Several member states of the European Union are sending reinforcements to help France fight the wildfires which are affecting several parts of the cou...

More than 6,200 hectares of land and 17 houses have been destroyed by a forest fire in the Gironde. Almost a month after the region was devasted by fo...

French Interior Minister Gerald Darmanin has said that there are currently 200 fires per day starting in France. He said that 98% of them are extingui...