The outcome of next Thursday’s UK general election will be a key talking point for markets near the end of next week, with a Conservative Party majority largely priced in financial markets.

On the data front, UK October gross domestic product is out on Tuesday. After avoiding a “technical recession” in the three months to September (Q3), but seeing the weakest year-on-year growth rate since 2010, the data will give the first insight into whether activity firmed in the early stages of Q4 or continue to remain vulnerable as a result of entrenched uncertainty. If leading indicators are to be believed, the latter is likely to be the case.

The US Federal Reserve’s (Fed) meeting on Wednesday should indicate whether a “mid-cycle adjustment” has now occurred. The minutes of the Fed’s October meeting appear to suggest that after three rate cuts this year, the rate-setting Federal Open Market Committee believes that the US economy is in a “good shape”. The day after is Christine Lagarde’s first meeting as the European Central Bank president. While further monetary stimulus may be on the cards in 2020, the market is not pricing in a change in the deposit rate.

Ending the week in the US is November retail sales data. According to web analytics tool Adobe Analytics, US online shoppers spent $7.4bn on 29 November, Black Friday, up by 19.6% from last year. This would likely aid the monthly retail sales reading, after a prior month-on-month reading of 0.3%. 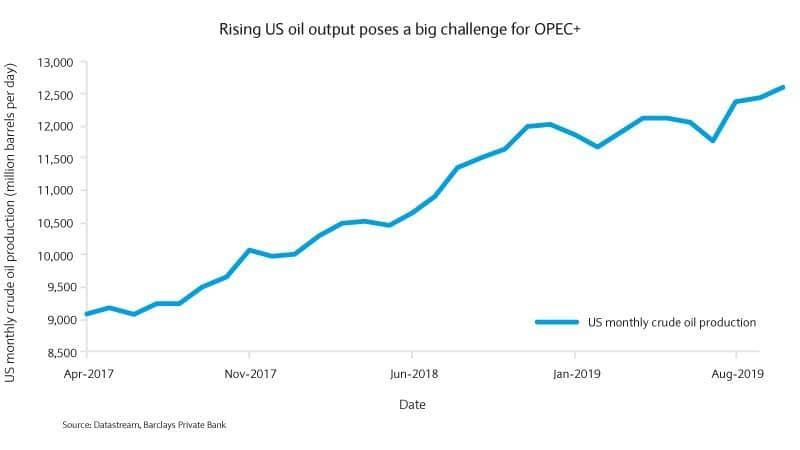 Looking into next year, markets will undoubtedly be focused on whether the Organization of the Petroleum Exporting Countries and allied producers (known as OPEC+) decide to extend cuts in oil production targets or not.

OPEC makes up a significant share of total production. Total daily production of oil, as of 4 September, was 82.5 million barrels per day (mbpd), with OPEC members producing 31.8mbpd and Russia 10.9mbpd.

OPEC+ lowered output by 1.2 mbpd earlier in 2019, with the agreement due to end in March 2020. Combined with geopolitical instability in Venezuela and Libya, tensions in the Middle East and US sanctions on Iran, the production cuts have reduced the supply of oil and been positive for the price of the commodity.

However, the upward pressure on oil prices has been offset by weakening global demand as the US-China trade dispute hits global growth prospects and non-OPEC supply of the commodity rises.

The US has significantly increased oil production over the past decade, becoming one of the largest producers globally and a net exporter, as opposed to net importer, of oil. Relative to the 82.5mbpd produced globally, the US accounted for 12.4mbpd of this.

Besides the US, supply growth from Brazil and Canada further increased aggregate supply in the non-OPEC+ world, which is now anticipated to be 1.7mbpd in 2020.

The fundamentals for oil suggests an imbalance in the market through 2020. Not only have non-OPEC+ countries (particularly the US) increased supply, but elevated trade tensions are doing little to provide upside support to oil prices.

OPEC+ members face a difficult decision in terms of making production cuts past March or not. While a continuation of the 1.2mbpd cut evidenced in 2019 seems likely, there is a possibility that further production is lowered in an effort to counter the downside pressures oil prices are facing. Such a move could increase the potential for an imbalance.

From today Monday January 24th the vaccine pass replaces the health pass in France and will apply to people aged 16 and over. ...

The police officer who was detained in connection with a shooting during a police operation in Nice on Wednesday has been charged with manslaughter...

Nice shooting-The police officer who shot a suspect dead in Rue de la Buffa in Nice on Wednesday has told investigators that it was “a complete accide...

Covid Restrictions- The French Prime Minister Jean Castex and the Health Minister Olivier Veran have announced a timetable for the easing of coronavir...

French Prime Minister Jean Castex and Health Minister Olivier Veran have presented a timetable for the lifting of Covid-19 measures at a press confere...