In the first week of October, Final September Purchasing Managers Indices (PMIs) will be released across all main regions (US, China, Eurozone and UK).  Despite some recent goodwill gestures from both US and Chinese authorities, manufacturing will likely continue to suffer from a slowdown in global trade. As such, we expect the indicator to remain in contraction territory in most regions although momentum should stabilize. Services activity, on the other hand, has likely continued to expand, albeit at a more moderate pace.

Amongst all this uncertainty, the household sector has proven very resilient so far and investors will continue to pay close attention to developments in the Eurozone and US labour markets. Unemployment rates for August (EU) and September (US) are likely to remain at multi-decade lows but with the US Federal Reserve (Fed) having tied its monetary policy to incoming data, September’s US non-farm payrolls will likely be the most important catalyst of the week. Recent data would suggest that job creation may have slowed down but we still expect healthy earnings growth.

The week starting on Monday October 7 should be quieter on the data front with investor focus likely to move to US-China trade talks which are currently scheduled to resume on October 10. Nevertheless, September’s Consumer Price Index (CPI) will likely draw some attention after the US Fed’s decision to cut interest rates last month. After a soft reading in August, the recent spike in oil prices may lead inflation to rebound temporarily although it should remain below the Fed’s 2% target.

While China didn’t follow the US in cutting interest rate, September’s money supply growth may give the market some indication as to whether the country’s central bank will need to go further than the cut in banks’ reserve ratios announced last month.

Finally, with the October 31 deadline approaching fast, uncertainty around Brexit is as high as ever. With only a few days left before the critical EU Leaders Summit (October 17-18), news flow is likely to accelerate. In regards to data, August GDP and industrial production are likely to confirm that growth in the UK remains sluggish. 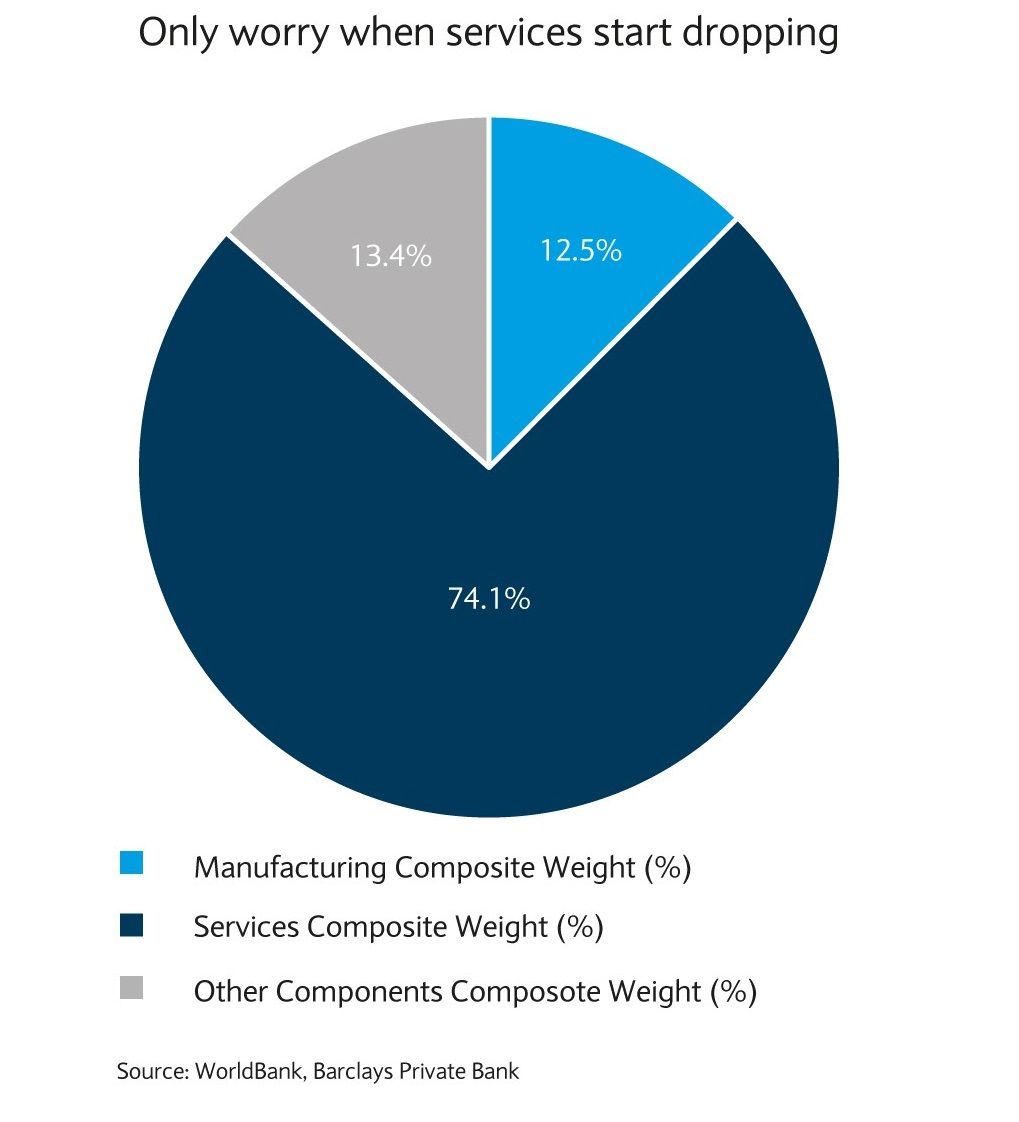 The September flash IHS Markit manufacturing PMIs released on Monday continued to signal weakness in the euro area. The leading indicator fell to 45.6 from 47 last month, primarily driven by Germany where the reading went even deeper into contraction, to 41.4 from 43.5 in August. The anecdotal evidence pointed to delayed investment as a result of the economic outlook and in particular persistent uncertainty on trade wars and Brexit.

Whilst we do not discount that Germany (a manufacturing and export-led economy) is struggling and is most likely in recessionary territory, this is not the case for all European economies. As we have mentioned in the August 30 chart of the week, manufacturing is only a component of the economy and does not paint the whole picture.

Our chart of the week shows that it is services that carry the lion’s share of output in France, Germany and the US.

And while the flash services reading stuttered in Europe, dropping 1.5 points to 52, it remains above 50, suggesting that the sector continues to expand. So far, macro data on both sides of the Atlantic, and especially from the US, remain fairly expansionary and most developed economies are supported by tight labour markets.

The fact that Germany is on the brink of a recession doesn’t necessarily mean that the rest of the world is, and we continue to prefer opportunities in countries with more domestically focused economies and less exposure to the secondary sector. But it will be important to monitor over the next couple of months whether manufacturing weakness further spread into services.

A French government spokesperson has said that there will be no changes in national restrictions this week. ...

A 36 year old man has died following an accident on the route de la Môle in the Var. The accident happened on Tuesday evening around 10pm when the mot...

The regional health agency has announced that 32 additional deaths from Covid have been reported in the Alpes Maritimes region. Figures released on Tu...