Increasing hopes of a mini trade-deal between the US and China and receding fears around a no-deal Brexit have helped calm markets lately, but it is to be seen whether they fed into October’s macro data.

The eurozone and US publish October’s purchasing managers’ index next week, with hope in both geographies for signs that the decline in manufacturing will stabilise on easing geopolitical risks. Services activity, which was partially affected by manufacturing weakness last month, should also rebound modestly and remain in expansionary territory in both regions.

Overall, the outlook for business activity should remain benign in the fourth quarter and we wouldn’t ring the recession bell unless there was a dramatic fall in the PMIs. Improved sentiment should spill over to households. The final University of Michigan Sentiment for October is likely to confirm a trend upward from September, despite slowing payroll growth and the latest round of tariffs on consumer goods.

In the eurozone, the focus will be on monetary policy as the European Central Bank (ECB) meets on 24 October, the first monetary policy meeting for the new ECB president, Christine Lagarde. The tone is likely to stay dovish although further easing should be off the table for now. The latest Bloomberg survey points to the ECB maintaining its deposit rate at -0.50%, after it was cut from -0.40% in September.

Following the central bank’s decision to reintroduce quantitative easing in November, rate cuts seem less likely without a significant worsening in the bloc’s macroeconomic backdrop (which we don’t see materialising for now) and more clarity on Brexit. Indeed, uncertainty over the UK’s departure from the European Union remains one of the main catalysts of market sentiment in the bloc. Until a definitive resolution is in place, eurozone consumer confidence, due out next week, is likely to worsen. 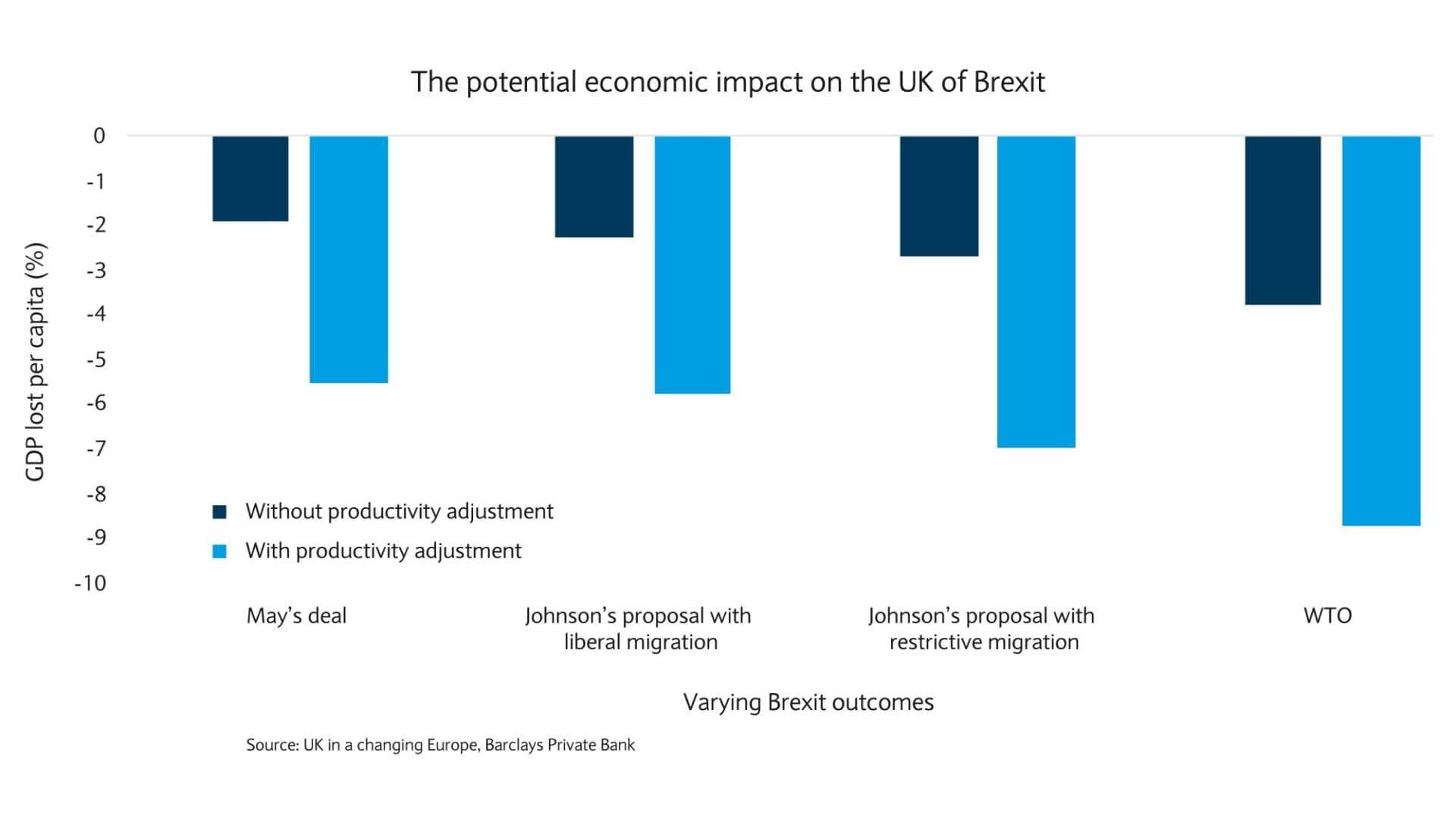 The UK in a post-Brexit world

Financial markets were correct to be optimistic that a Brexit deal was on the cards on 11 October. After talks between the European Union (EU) and the UK entered the “tunnel”, the two parties reached an agreement on Thursday.

The proposal advanced by Prime Minister (PM) Boris Johnson, where only goods align with the EU, and the UK as a whole exits the customs union, gives the country autonomy in negotiating trade deals (a win for Brexiteers).

However, what does this mean in terms of economic impact?

The chart highlights how the PM’s Brexit proposal might fair compared to other Brexit models, according to research published by UK independent think-tank “The UK in a changing Europe” on 13 October. It shows how much the UK’s income per capita is expected to vary over the next ten years, when accounting for tariff and non-tariff barriers as well as less future integration with EU member countries. The reference point is the UK remaining in the EU.

Adjusting for productivity, Johnson’s proposal with liberal migration would lower income per capita by 5.8% in ten years’ time. However, as the report acknowledges, modelling economic impacts of hypothetical scenarios is “fraught with difficulty”.

But need the Brexit effect really be that bad?

The analysis does not factor in changes from foreign direct investment (FDI), which has arguably been held back from the doubt over future trading arrangements. Additionally, the model does not account for changes to existing trade barriers between the UK and non-EU countries. Finally, and something which cannot be feasibly estimated, is the impact of fiscal and monetary policy choices on the economy. Given the PM’s plan to loosen the purse strings, however, this could alleviate some pressure faced.

On the other hand, the PM’s proposals assumed in the research is a best-case scenario. The potential downside is shown in the chart under World Trade Organisation (WTO) terms, the equivalent of a no-deal outcome.

So whichever Brexit trading model with the EU emerges, the UK’s growth prospects will be reliant on FDI, strong trading relationships with non-EU countries and, likely, some additional fiscal stimulus.

A French government spokesperson has said that there will be no changes in national restrictions this week. ...

A 36 year old man has died following an accident on the route de la Môle in the Var. The accident happened on Tuesday evening around 10pm when the mot...

The regional health agency has announced that 32 additional deaths from Covid have been reported in the Alpes Maritimes region. Figures released on Tu...