Company news will pick up pace next week, with fourth-quarter earnings being published for more than 800 companies. That said, key macro data and economic news will also remain on investors’ watch list.

In the eurozone, the European Central Bank (ECB) monetary policy meeting, scheduled for 23 January, is the main event in the spotlight. The first rate-setting meeting of 2020, and with new ECB president Christine Lagarde at the helm, is likely to be to the dovish side. Further easing should be off the table for the time being, especially without a significant worsening in the bloc’s macroeconomic backdrop.

The eurozone and UK publish January’s IHS Markit flash purchasing managers’ indices (PMI). The Bank of England will likely have their eyes peeled on the UK flash data before their 30 January meeting for any imminent signs of recovery after the economy has showed signs of stuttering.

In the US, investors will closely monitor January’s IHS Markit flash PMIs for an indication on the health of both the services and manufacturing parts of the economy. After the last readings showed signs of improvement in December, expectations for 2020 are positive with services expected to remain resilient and hopes of further recovery in US manufacturing activity.

While some stabilisation is probable, especially on the back of the US-China phase one trade de-escalation, a sharp acceleration seems unlikely with uncertainty still elevated. In addition, investors will examine December’s new home sales data to assess the health of the housing sector. 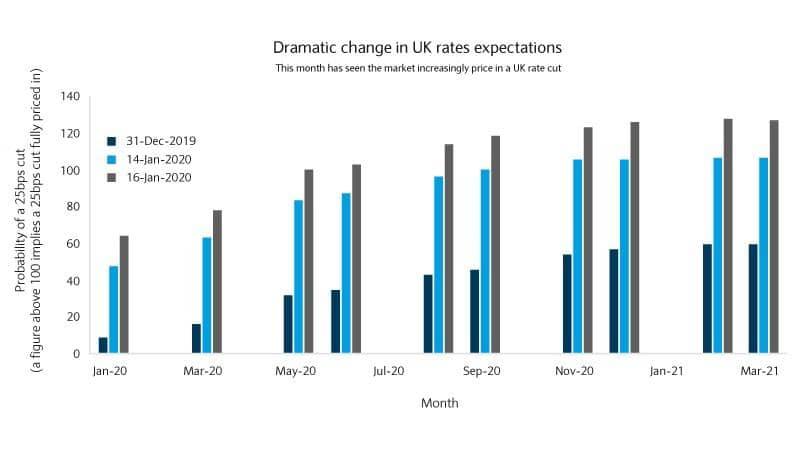 Subdued inflation and weak output: is it time for an “insurance” cut?

UK November gross domestic product (GDP) data shows an economy that has weakened but kept afloat despite businesses grappling with uncertainty. Not least the extension of article 50 and the subsequent calling of December’s election.

On a year-on-year basis, GDP growth of 0.6% was the weakest since June 2012 and continues the contraction in output seen in 2019. The weakness was widespread across industrial production and the dominant services sector, which fell 0.3% month on month, the worst since February 2018.

However, the first half of the year could see modest growth, facilitated by some potential tailwinds.

The weakness and the juxtaposing potential for a recovery provides the members of the monetary policy committee (MPC) with a dilemma before their 30 January meeting.

On the one hand, they could continue to leave rates unchanged in case a recovery surfaces in the first half of 2020, as well as clarity on Brexit, and vote for a rate cut if this does not materialise. However, this would leave the risk of being reactive as opposed to proactive.

On the other hand, the MPC could provide an “insurance” cut to provide support should growth continue to stutter while running the risk of overheating the economy and generating inflationary pressure on the upside. This risk is definitely lowered by December inflation reaching a three-year low at 1.3%.

With two MPC members already dissenting in favour of rate cuts and Governor Mark Carney, Silvana Tenreyro and Jan Vlieghe starting to express concerns about the economy, the latter is looking increasingly more likely than the former.

At the time of writing, the rates market prices in approximately a 62% chance of a rate cut in January, with a 25 basis point cut fully priced in by June.

A motorcyclist has been seriously injured following a road accident on the Moyenne Corniche. The accident occurred shortly after 6pm on Monday when th...

Enquiries are continuing into the circumstances surrounding the death of a diver off the coast of Saint Raphael at the weekend...

A motorcyclist has been seriously injured in a road accident on the Promenade des Anglais in Nice this Monday morning. ...

The Var has been placed on a yellow weather alert for thunderstorms today while the heatwave alert has been extended....

According to a study by Car Industry Analysis, the Principality is the country with the highest number of new Ferraris sold per inhabitant in the worl...