Investors will remain on alert next week as they digest key business activity data from different geographies, while markets brace themselves for a potential new round of US-China trade talks in early September.

In the eurozone, August’s preliminary purchasing managers’ index (PMI) has already signaled a slight improvement in the region. The final IHS Markit PMI is expected to confirm this trend, with both manufacturing and services edging higher in the month although still contracting. On the domestic side of the economy, August’s retail sales will provide a better outlook on household spending, which is expected to remain firm.

Elsewhere, investors will be looking closely at August’s US final IHS Markit purchasing managers’ index and China’s Caixin purchasing managers’ index to gauge the impact of ongoing trade tensions on the two economies. Manufacturing will likely remain on the soft side as a result of businesses delaying investment decisions, while services are forecast to broadly hold up.

Next week will also see a series of data from the US labour market, which is expected to remain a bright spot for the economy. August’s US unemployment data looks set to stay at multi-decade lows. Average earnings growth and non-farm payrolls for the month should hold steady, shrugging off increasing headwinds from trade tensions as the domestic economy remains resilient.

In the UK, markets will await the IHS Markit/CIPS August PMI with Brexit expected to be a drag on the manufacturing component, while services are likely to be impacted less than manufacturing by Brexit uncertainty. The resilience of the housing sector is continuing to be tested, with both the Nationwide and Halifax August house price indexes out in the UK. 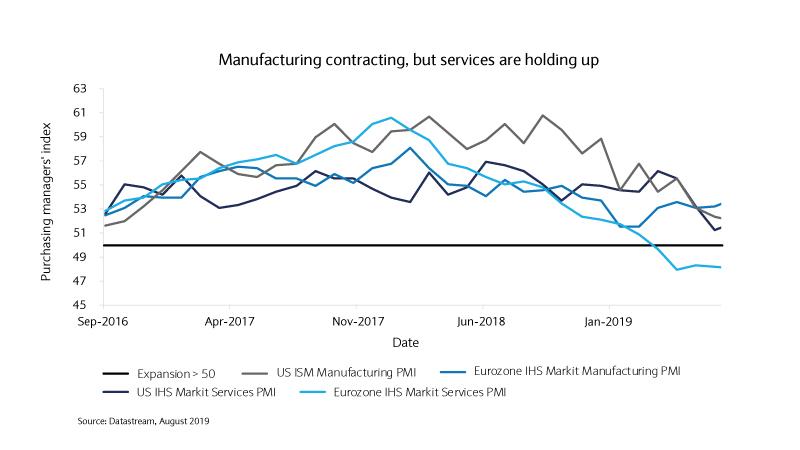 How spooked should investors be by weaker US manufacturing?

The provisional IHS Markit US manufacturing purchasing managers’ index (PMI) contracted in August for the first time since September 2009, if only marginally. Such a signal is particularly hard to ignore at a time when trade wars are continuously escalating.

Interestingly, US manufacturing has kept expanding for some time, despite increasing tariffs against China lifting “cost-push” pressures on producers.

Europe, on the other hand, has been contracting for the last seven months as the weakness in global demand has been too much to bear for the export-driven economic area. However, it has recently seen a slight improvement.

Many investors are beginning to question whether the wheels are coming off the global economy. While the readings are disconcerting, we feel that the economy has weakened as opposed to being close to recession, with monetary easing to further support the economy likely for the following reasons.

Firstly, manufacturing is a segment of the economy which is understandably weaker in the midst of sluggish global demand and tariffs. However, the other main component (services), which has the majority share of output of both economies, has remained fairly robust as it is relatively insulated from trade tensions.

Secondly, the PMI survey is not an exact science. The survey is directional as opposed to momentum based. What is meant by this is that the reading will be lower when more producers say sales went down as opposed to those who say sales went up. This is not necessarily the same as sales falling, on aggregate.

While PMI readings are rightly signaling a slowdown in the global economy, we believe that investors’ fears are overdone as official data still look strong. Although much will depend on the outcome of trade negotiations between China and the US, we remain of the idea that manufacturing and services activity will eventually stabilise.

Covid-19 saliva tests have begun today in schools in the Alpes Maritimes. The Mayor of Nice, Christian Estrosi, said that 2,900 tests will be performe...

The National Health Agency has reported ten new deaths from Covid during the weekend in hospitals in the Var (data concerning nursing homes has not ye...

Public Health France figures published on Sunday have shown that the number of Covid patients in intensive care in France is at its highest since Nove...